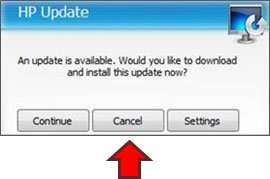 Once again HP have deceitfully gone ahead and released a printer software update aimed at combating the generic cartridge market. In the midst of a global pandemic and with no regard to the fact that people are already facing hardships HP have still gone ahead with these updates.

The cartridges affected by the update include HP905XL and HP955XL model cartridges. Once the auto software update is installed then your non genuine inks are useless. What a horrid company HP is, nothing but a greedy, money grabbing bunch of unethical tyrants.

This will be the ninth software update which HP have released which specifically target these model cartridges and even though they know that it infuriates the masses they really don’t give a damn. It’s all about money and  greed and ethics play no part in their company’s strategies.

My personal opinion from being in the industry for many years is that HP are a very average quality printer and for the home user or small business owner there are far better options and manufacturers that don’t use these under handed tactics to try and control the market. Canon are one company that has never used these unethical means of controlling the printer cartridge market and they are a much better quality printer as well.

I still don’t get why people support HP when we constantly are bombarded with negative feedback about their products. It’s kind of like the old theory of repeatedly doing the same thing and expecting a different outcome. Anyway enough whinging from me as there are some solutions available.

Turn Off your HP printers updates

IF you turn OFF your auto updates on the printer itself then you can avoid the above from occurring. The trouble is that most folks seem to be hell bent in having to update everything. Don’t they remember the old saying “If it ain’t broken don’t fix it”. Unfortunately people still keep updating their printer software and the issues just keep happening. I don’t know what it will take to change people’s way of thinking.

I hear so often from folks that they have updated Windows 10 etc and all of a sudden they have issues. This is exactly the same scenario, if it ain’t broken don’t fix it! Anyway here’s the way to turn OFF the updates so that you can continue using the non genuine cartridges.