After installing a new Epson ink cartridge your printer comes up with the following message: “Ink Cartridges Cannot be Recognised“. This is a very common problem with most Epson printers and there are a number of reasons why this can occur. Most people immediately blame the ink cartridge (especially if it is a generic cartridge) however many times the fault lies in the actual printer software which tries to detect either a faulty or non genuine cartridge having been installed in the printer. Epson seem to be hell bent on trying to deny the consumer the choice to use a cheaper “Generic” cartridge rather than using the over priced Epson cartridge. Often a generic cartridge will be used for the first time and the “Ink Cartridge cannot be Recognised” error will occur immediately. The printer software is actually able to detect the difference between the Generic Printer Cartridges microchip and the genuine cartridges microchip resulting in the error message appearing and the printer refusing to operate.

Solutions to the generic cartridge to not being recognised

There are several methods used to overcome this issue. If you experience the above mentioned situation of replacing only one cartridge with a generic one and having the error message appear then try the following solutions. 1. Remove the offending cartridge from the printer, make sure that the small microchip is clean and intact. Replace the cartridge, unplug the printer at the wall for about 20 mins and the turn back on. Often this resets the printers memory and will overcome the error message. 2. Remove all cartridges and replace ALL OF THEM with compatible cartridges. Very often when first changing to compatible cartridges we have found this to work. The reason being the fact that the printer is unable to now differentiate between the micro chips on each cartridge as they are all using the same kind of generic micro chip.

Another method which often works is to remove all of the cartridges and try to just install them one at a time. As stated previously the Epson firmware is very complicated and the user must be willing sometimes to try various methods to trick the printer into accepting the cartridges.

What else can cause the Generic Ink not being recognised 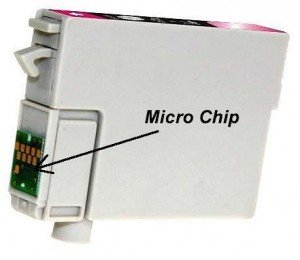 There are several other issues which can also prevent a generic cartridge from being recognised. 1. a faulty micro chip on the cartridge. Although quite uncommon it can occur as with any mass produced item. 2. an out dated micro chip. This is especially so with compatible inks as often an Epson compatible cartridge will have several version micro chips to keep up with Epson’s software updates which they use to try and combat the use of generic ink cartridges. Without the newest version of the compatible cartridge you may find this occurring.

Will some printers simply not accept generic cartridges?

The answer to this is a definite NO. There is no Epson printer which I have come across in the past 10 years that simply wont accept the use of generic cartridges. In saying this there are some exceptions such as The printer is from another country and is region locked and you have purchased cartridges from a different region. No matter what you do they will not work until you install cartridges from the correct region. This is a very common occurrence when people purchase their cartridges on Ebay as often they are shipped from overseas suppliers.

Another exception is when a cartridge has an out dated microchip. If the printer has installed an updated software version that has been designed to combat the generic microchip on the cartridge then it will not work. The only solution to this is to make sure that you cartridges have the very latest microchip attached.

To summarise, more than often the “Ink Cartridge Cannot be Recognised” error message is not caused by a faulty cartridge but is simply the result of a very poor firmware set up in the modern Epson printers. Believe it or not any print consumables retailer will tell you that this is the most common complaint of any printer issue. Epson use it primarily to try and stop the end user from using a generic cartridge and therefore losing them a sale of their overpriced genuine cartridges. Finally don’t think that this error message wont occur using a genuine Epson cartridge as frequently it will. For more advice on printer issues or helpful advice contact our team at Ink Hub. Office: (08) 7324 3065  Mob: 0408 69 1299

How a Laser Printer Works

How to Save on Printing Costs